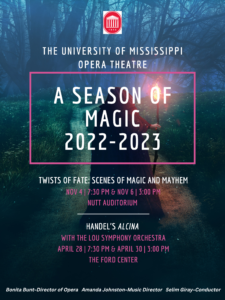 Join us for the Fall Opera Scenes – Twists of Fate: Scenes of Magic and Mayhem

Join the students of UM Opera Theatre as they present a program of diverse repertoire from the operatic and musical theatre repertoire including scenes from Carmen, Die Zauberflöte, L’elisir d’amore, Hamlet, Cendrillon, Sweeney Todd, Into the Woods, and A Gentleman’s Guide to Love and Murder.

The University of Mississippi Opera Theatre provides comprehensive training for the next generation of singing-actors. Performers receive developmental training in movement, interpretation, stagecraft, audition preparation, and learn how to work with conductors, coaches, directors, and colleagues to prepare for careers on the stage. UM Opera Theatre produces quality, award-winning productions of operas, operettas, and musicals in many languages and styles, spanning the Baroque to contemporary, and including well-loved classics and new works alike, e.g., The Light in the Piazza, Albert Herring, L’Enfant et les Sortilèges, La finta giardiniera, L’elisir d’amore, and several works by Gilbert & Sullivan. UM Opera Theatre is strongly committed to collaborations with contemporary opera composers, having premiered the chamber orchestration of Linda Lister’s State of Grace (2018) to great acclaim, and enjoys regular partnerships within the Oxford community and beyond. 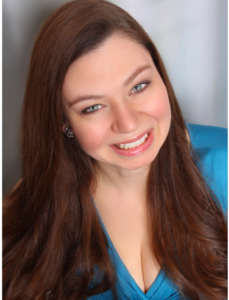 Soprano, director, and educator Bonita Bunt is comfortable on or off stage in the operatic, musical theatre, or concert genres. Since earning her doctorate in music in 2017 from the University of Nevada, Las Vegas, Dr. Bunt has been involved in over 35 productions in the Las Vegas Valley as performer, director, assistant director, and stage manager. She has portrayed Edith in Vegas City Opera’s award nominated hit at Super Summer Theatre, The Pirates of Penzance, the Queen of the Night and 2nd Spirit in Vegas City Opera’s The Princess and the Magic Flute, a reduced version of Mozart’s opera aimed at young audiences, and the Notary in Gianni Schicchi. She has also performed in concert with Opera Las Vegas including the program Who’s Afraid of Opera which reached over 1400 Clark County students, Opera Uncorked, and Holiday on Broadway. Other favorite roles include Zerbinetta, Tytania, and Giannetta in Donizetti’s L’elisir d’amore.

Recent directing projects include the celebrated family holiday classics Amahl and the Night Visitors and the micro-opera A Hand of Bridge by Samuel Barber paired with its contemporary sequel Avow by Mark Adamo for The University of Alabama Opera Theatre. She enjoyed great success directing Hansel and Gretel for Opera Las Vegas in 2018, revived in 2019, as well as a production of Britten’s Noah’s Flood which toured area churches. One of her favorite creative projects was a site specific opera performance of Don Giovanni for the Barrick Museum at UNLV, specifically designed to incorporate the current exhibit which she hosted as narrator/museum tour guide. She was assistant director for Opera Las Vegas’ west coast premiere of Ricky Ian Gordon’s 27 and Vegas City Opera’s Gianni Schicchi, both collaborations with Vegas Theatre Company. She also co-directed the west coast premiere of Sasha Cohen’s Cooperstown, A Jazz Opera in 9 Innings for Opera Las Vegas’s Living Composers Series.

Dr. Bunt was honored to be the Stage Directing Intern for Red River Lyric Opera during the summer of 2017, directing the one-act opera Beauty and the Beast by Vittorio Giannini, and serving as assistant stage director and stage manager for La bohème and assistant stage manager for Turn of the Screw and Alcina. In the summer of 2015 she worked as the Senior Stage Directing Intern at the acclaimed Druid City Opera Workshop at the University of Alabama where she directed scenes from Manon, Falstaff, The Merry Wives of Windsor, and West Side Story. Dr. Bunt has directed opera scenes at UNLV and the University of Northern Colorado, cabaret performances for First Coast Opera, and plays at Flagler College, as well as serving as assistant director for UNLV’s productions of Don Giovanni, La bohème, Le nozze di Figaro, and Trial by Jury, and was guest director for the new work No Guarantees, a romantic robot comedy by Cynthia Wong. Her most acclaimed solo project is the creation of a singable English translation of Ambroise Thomas’s french opera-lyrique Hamlet, using original Shakespeare texts as inspiration. The reduced, non-traditional Hamlet premiered at UNLV on May 6, 2017 as part of UNLV Opera’s sponsored Hamlet Festival. Dr. Bunt directed the premiere of Hamlet in English as the culmination of the week-long series of lectures and performances.

She received her Bachelor of Music degree in Vocal Performance from Jacksonville University in Florida and her masters and doctorate from the University of Nevada, Las Vegas. Dr. Bunt recently completed a graduate certificate in Vocology, and is pursuing licensure through the Association for Body Mapping Education. Dr. Bunt is an active educator presenting at conferences and studios and is a member of the National Association for Body Mapping Educators, the National Opera Association, and the National Association of Teachers of Singing. Academic interests include movement for singers, somatic education, vocal pedagogy and health, and contemporary and underperformed opera and art song.